A 3-year-old boy dropped off on her doorstep with a small suitcase, a bicycle, and a car seat changed Sarah Koeppen’s life forever. This eventually birthed a dream in her heart to help end infant and toddler abandonment.

Her dream became a reality in 2014, when the Hope Box, a nonprofit, opened in Acworth with a mission to rescue and assist at-risk babies age 3 and younger. Koeppen’s vision for the Hope Box is to eliminate infant and toddler abandonment, neglect and abuse, and to help infants connect with forever families where they can be physically, spiritually and emotionally nurtured.

Koeppen and her husband Joel married in 2000 and, by 2006, had four children. Early in their marriage, while living in Colorado, the couple felt called to mentor families in crisis. In 2009, a woman at church with a troubled daughter came to Koeppen, explaining that her daughter no longer could care for her 3-year-old son. She wanted to know if Sarah and Joel could take custody of him.

“I gave this desperate grandmother my number and quickly received a call from the mother,” Koeppen said. “She dropped Elijah off with a few belongings. He just waved at her as she left.” 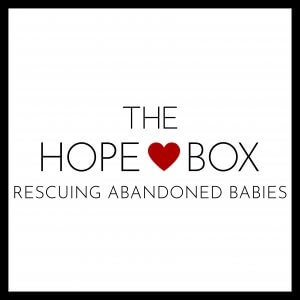 To protect this precious life left in her care, Koeppen began an exhaustive study of state and national adoption and abandonment laws. Because guardianship afforded no rights to the guardians, the Koeppens fought for and gained sole custody of Elijah. People in similar situations began to seek out Koeppen to help them with custody issues. She soon became an expert on the issue of infant abandonment.

Even though the vision for the Hope Box remained in Koeppen’s heart, it was put on hold because of family change. Her husband wanted to be a chiropractor, which involved a move to Georgia in 2012. He and the kids went to school, and Koeppen enjoyed a time of dreaming, planning and being a stay-at-home mom.

In four years, the framework had been put in place to launch the nonprofit. Koeppen also was instrumental in amending the Safe Haven law in 2017. Before the amendment, women could leave their babies only at a hospital, and had to leave their personal information. Now, a woman who knows she cannot care for her baby (up to 30 days old) can relinquish the baby without any questions asked to any employee at fire and police stations and hospitals.

The reasons for child abandonment are broad, from sex trafficking, homelessness and illegal status to domestic abuse and desperation. The Hope Box works with legislators, public safety professionals, medical personnel, crisis pregnancy centers and adoption professionals to address and solve the issues involved with infant abandonment. They do this by providing education, updating legislation, developing procedures to rescue and receive relinquished children, and bridging the gap between child welfare organizations and forever families.

• Advocate team: Become a voice for the nonprofit.
• Professional team: Volunteer skills and expertise.
• Medical team: Each team consists of one professional and three nonmedical volunteers.
• Reach and Rescue team: Take to the streets to assist infants. Must be 18 or older.
• Outreach team: Partner with hands-on acts of service.
• Prayer team: Cover the nonprofit in prayer daily.

To volunteer or learn more about the work of the Hope Box and the Safe Haven Law, visit thehopebox.org or call 770-765-6301.

By Susan Schulz, a wife, mom, writer and mentor who lives and plays along the Etowah River in Canton.