We asked football coaches of the schools in the Around Acworth distribution area to give us a peek at their fall seasons. We’ve included reports from the coaches who responded by our deadline. 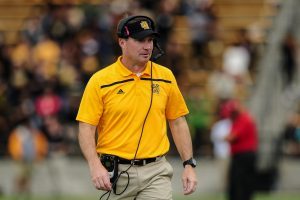 “We’re excited about the opportunity to get back on the field. We had a lot of positives that first year, but we’re still nowhere near the expectations we have for this program. I credit our guys for putting in the work this spring and this summer to keep that edge, because we’re not going to sneak up on anyone in Year 2. This is a good freshman class coming in that will be a nice complement to our returning guys. Our staff has taken great pride in attracting quality student‐athletes from Georgia, but specifically from the high school programs in our own back yard.” Photo courtesy Kyle Hess, KSUOwls.com

The Warriors return 17 starters off a team that lost five games by a total of 13 points. Every game was decided in the fourth quarter. Obviously, the offseason motto has been FINISH!

On offense, senior quarterback Will Lovett returns after throwing for more than 2,300 yards last season. He has Division I offers from Arkansas State and Troy University. Running backs Jai Erwin and CJ Cole also return for their senior season after combining for more than1,000 yards in 2015. Look for Trey Urquhart, a junior, and sophomore Christian Singleton to push for playing time at running back. Senior receivers Drew Tejchman, who has 16 Division I offers including N.C. State, and Quannie Green return and give Lovett a deep threat. Tejchman had more than 800 yards receiving in 2015. Other receivers include seniors Imad Strozier, Allon Johnson, Hunter Parrish and Ziyear Oyefesobi. Senior offensive linemen Christian Albright, AJ Diaz and junior Nick Price return up front. Seniors Cadarein Carter, Ben Melendez and juniors Brandon Moore and Jacob Longacre will start on the offensive line.

In the kicking game, the No. 1 rated kicker in the country Will Horton returns for his senior season. He will do both punting and kicking duties. Jacob Longacre returns as deep snapper.

The senior leadership and staying healthy will be the key to another successful season. North Cobb has been to the state playoffs for five consecutive seasons.

We ended our season last year playing the No. 2 team in the country, Colquitt County. It was a great measuring stick as to where we would like our program to be. I am excited about some of our returning players who experienced last season.

Senior Chad Terrell (WR) will lead our receiver group while juniors Tyler Bird (LB) and Braylin Fisher (LB) will lead our juniors. Sophomores Zion Hawkins (WR) and Ross Malmgren (QB) will play a huge role this year on the offensive side of the ball. We will have a pretty young team so our success will depend on how fast we can mature!

Since I am new to the program, I really don’t have much to say about last season other than the program I inherited from Scott Ryle is in good shape. Coach Ryle did an outstanding job of resurrecting the program in his three­year tenure, taking the team from 1­9 his first year, to 5­5 his second season, to the school’s first winning season in its nine years of playing football with a 6­4 record. We lose several impactful seniors from last season.

On the defensive side, Parke and Hamby anchor our defensive line. Senior Riley Martin is also a returning starter from a year ago. Titus, Nelson and junior Bailey Armstrong make up a trio of solid players at linebacker. Austin Clark and Pierre will also push for playing time at linebacker. Pierre may also see action at safety. Walker returns as a starter at safety. Also vying for a starting position at the other safety/outside linebacker position is junior Will Marquess. Senior free safety Mark Watson returns as a starter this season, but will be pushed by Bill Carver right behind him. Finally, the two cornerback positions are up for competition between Ortiz, Ayers, and Pierre.

Junior Luke Pearson will handle the place­kicking duties as he did in 2015. He will compete with Stephen Smith for punting duties.

The overall outlook for our team is good. As with most small school programs, one key component to our success will be the abundant blessings of good health among our players. We’ve had a very progressive and productive summer with a ton of buy­in from the kids. Expect us to be competitive throughout the season.

Head Coach Gary Varner is excited about the start of the 2016 football season. The Buccaneers return two starters on offense and three on defense from the 2015 state championship team. On offense, the Buccaneers will be expecting big things from quarterback Tate Tatum, who moves from playing cornerback last year. The running game will be counting on Charles Anderson, Adrian Boyd, L.J. Moore and T.J Carr to fill the tailback role with only Anderson having varsity starting experience. The offensive line is anchored with two returning starters. Devin Miller and Carter Francis return to a line that produced more than 4,000 yards. Tight end Jacob Perry looks to establish himself after getting his only start of the year in the Georgia Dome.

Defensively, the Buccaneers return only three starters and all come from the linebacker position. Carson Sorrells, Gavin Twigg and Michael Robinson will be counted on to solidify a defense that has eight newcomers. Royce Francis, Brooks Walper, Harrison Kemp and Dawson Arnold have all had a great spring and are expected to step into starting roles. Special teams should be solid as they return kicker Skyler Davis and punter Grant Hughes.