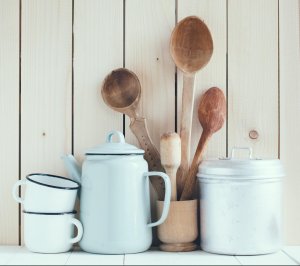 Have you ever heard the expression that soup is good for the soul? It is the go-to meal for anyone battling a cold. Soup can provide you with more fiber, vitamins (particularly Vitamin A), and minerals (potassium, magnesium and iron), thanks to the variety of colorful veggies used. Depending on the type of soup you eat, there are generally fewer calories than in other meals, so it can help you lose weight, or maintain a healthy weight.

Healthy Additions
By adding spinach to homemade chicken noodle soup while cooking, you can help knock out a lingering cold, because spinach is full of antioxidants that help boost your immune system. The noodles help you feel full quickly, and the liquid is good for hydration, which is important when you’re sick. If you have anemia issues, try clam chowder with bell pepper strips on the side; these two combined pack a supersized dose of iron into your diet.

Don’t waste it.
Throw leftover ham or turkey into a Dutch oven, add 8 cups of water, and cook for approximately 30 minutes for some really tasty broth. Next, add any leftover rice casserole, cooked carrots or green beans, or even some dry pasta. If you want a broth-based soup, add some crushed tomatoes or even tomato sauce. If you prefer a creamy version, cook the above in the broth, season to taste, then add heavy cream or evaporated milk. You’ll only need approximately 1-1½ cups, depending on the amount of soup you’re making. If the creamy component is added at the beginning, you run the risk of it boiling over. A quick method for making creamy soups is to add a can of your favorite “cream of” soup to your recipe; just remember, this will increase the salt in your soup.

Extra, Extra!
Cooked pasta or rice are particularly good when topped with leftover beef stew. It also is a great baked potato topping, when you only have a small amount left over. It also can be used as a starter for vegetable soup – just add more broth, more seasoning, and, if desired, crushed tomatoes or tomato sauce. Leftover clam chowder makes a great sauce for pasta; just whisk 2 teaspoons of flour into 1 tablespoon of water, then stir into the chowder.

Creamy Soups
Vegetables that soften as they cook are a healthy way to make creamy soups. Butternut squash is a great example. If using a fresh squash, slice it in half, scrape out the pulp and seeds, and lay it cut-side down on a baking sheet drizzled with olive oil. Bake at 400 degrees for approximately 30 minutes, or until the skin of the squash is fork-tender. Once the squash has cooled slightly, scrape the shells into a pot, add ½ teaspoon of ground nutmeg, salt to taste, and 32 ounces of chicken broth or vegetable stock. Stir frequently to break up the squash, then add a dash of ground red pepper. If desired, add one cup of whole milk or heavy cream. Serve topped with roasted pumpkin seeds, pecans and a dollop of Greek yogurt. Frozen squash is a great time-saver for this recipe; just use two 32-ounce bags and put in a pot with broth to cook.

Flavor Boosters
If you throw a ham bone into split-pea soup with the broth, the marrow will give your soup a new flavor profile. Simply simmering a meat bone (turkey, chicken, ham, etc.) for an hour or so can create delicious stock to be used at a later date. This liquid not only is tasty, but is high in vitamins and nutrients. It can be made, then frozen, for later use.

Time Savers
There are some ingredients that, if kept on-hand, can save you time and still result in a tasty soup. Pasta sauce can replace tomatoes and seasonings in almost any recipe. Dry bouillon can turn water into broth in a snap, but make sure to use powdered (not the cubes), so you can control the amount. Frozen vegetables, and even canned pumpkin, take the work out of preparing fresh ones to use. Canned beans, as opposed to dried ones, can cut your cooking time in half. The bottom line is that if you like an ingredient, then use it.
Happy Cooking!

– Tiffany Hughes, an Acworth resident and works for the Booth Western Art Museum.

Combine flour with ranch and one tablespoon of Montreal steak seasoning in a zip-top bag. Add chuck roast cubes, and shake to coat.

Heat canola oil in a large Dutch oven over medium-high heat, then add the meat using tongs. You don’t want to dump the extra flour into the pan. Stir to coat, then turn heat to high. Once the meat is seared (golden brown on the outside), reduce the heat to medium and add onions and garlic. Cook until the onions are translucent.

Add mushrooms, carrots, potatoes and broth, then sprinkle with the remaining 1 tablespoon of steak seasoning. If the veggies are not covered in liquid, add a little water. Add parsley, stir to coat, then reduce the heat and simmer for 30-45 minutes, stirring occasionally. The stew will thicken as the veggies cook. Sprinkle it with black pepper. If desired, add a dash of ground red pepper.

Combine all ingredients, except the milk and ground red pepper, in a large saucepan. Bring to a boil, then reduce the heat to medium-low, and simmer for approximately 45 minutes. Do not add additional water unless the saucepan dries out. When the peas are soft, use an immersion blender, or pour half the contents of the pot into a blender. Puree until smooth, then add back to the pot. Stir in milk and red pepper, and simmer an additional 15 minutes. Serve with a dollop of sour cream or Greek yogurt, and a drizzle of dark sesame oil.

If you don’t have ham, cook 6 slices of bacon in the saucepan, remove and crumble, then add the rest of the ingredients, without draining.

When the soup is done, add the crumbled bacon back into it.

Cook the sausage in a large Dutch oven over medium-high heat. Break the sausage apart as it cooks. When done, drain the fat, but leave the sausage in the pot. Add 8 cups of water, tortellini and pasta sauce. Reduce the heat to medium-low and simmer, without boiling, for at least 30 minutes. Taste and season as desired. Add milk just before serving. The type of pasta sauce you choose will impact the flavor of your soup.

Drizzle the olive oil in a large Dutch oven, then add chicken and onion. Stir to coat, and cook over medium heat until the chicken is golden and the onion is translucent. Add broth, water, carrots and spinach, and continue cooking until the liquid comes to a rolling boil. Stir occasionally to break up the spinach.

Add lemon juice and pasta, and continue to cook over medium heat. Once the pasta is al dente, taste for salt and add as needed, along with ground red pepper. If using celery, add with the carrots.