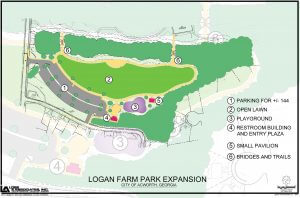 Construction is moving along on the Logan Farm Park expansion. Crews working at the site say they plan to meet the scheduled late-2016 completion date.

The expansion will add 15 acres to the 120-acre Logan Farm Park which winds through the center of the city. The expansion, which is along Cherokee and Taylor streets, will add a large playground, a group shelter, restrooms, more walking trails and greenspace.

Michelle Berryman, recreation coordinator at the Acworth Parks, Recreation and Community Resource Department, provided an update in August, just prior to the Around Acworth magazine’s September edition deadline.

“Currently, the parking lot is being completed, with curb having been poured,” said Berryman.  “The restroom facility has gone vertical and the final touches will be put on that within the next month and a half.  The playground equipment has been delivered and will also be completely installed within the next two months.  The next steps are to put the two bridges in place that will cross the creek, pour the sidewalk, install irrigation, then complete the final grading of the surface so that sod can be put down before dormancy sets in for the winter. We are looking forward to a fully completed park by the holidays for our community to enjoy!” 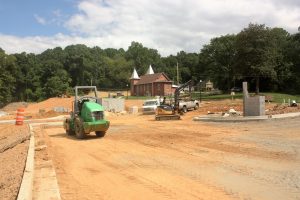 A recent visit to the park revealed work crews busily moving dirt and rocks, and testing water pressure near the restroom building. Dirt in the planned parking areas was level and surrounded by formed concrete curbs. Areas of the park that previously were wet are drained, leveled, and almost ready for sod.

Money for the park expansion was provided by a Special Purpose Local Option Sales Tax (SPLOST) approved by voters.

The historic house in Logan Farm Park, next to the parks and recreation offices, will also be renovated and restored and become a meeting and gathering facility, according to city officials.

If you have more questions about the park project, email James Albright, director of Parks, Recreation and Community Resources, at jalbright@acworth.org.