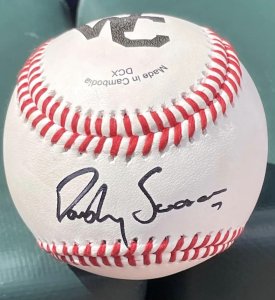 Five local youth baseball players got the opportunity of a lifetime when their coaches and association boards chose them as their park’s Wellstar Positive Athlete of the Year.

Their reward for being selected for the honor was getting an inside tour of Truist Park in September and spending an hour on the field with Atlanta Braves All-Star shortstop (and Kennesaw native) Dansby Swanson. He also autographed more than a few balls, hats and jerseys during his time with the future major leaguers.

Braves rookie sensation Vaughn Grissom made an unexpected appearance and talked with the kids while also signing some items for them.

Player selection for the event was based on attributes such as displaying great sportsmanship; encouraging fellow teammates and competitors; being respectful to coaches, parents and umpires; and taking pride in their park by keeping it neat and litter-free.

The Acworth and Kennesaw players and associations that participated were Levi Wheeler from Acworth Baseball, Lucas Smith and Christian Scragg (there was a tie among the board members who voted) from Kennesaw Baseball and Softball, Eli Furnish from Oregon Park Baseball and Patrick Layne from West Cobb Baseball.

Acworth Baseball Association
Levi Wheeler is 12, lives in Acworth and plays for the Bronco Cardinals.

Kennesaw Baseball Association
Lucas Smith and Christian Scragg are both 7 years old, live in Kennesaw and play for the Bananas and Kennesaw All-Stars.