The vision of dedicated women lives on, from 1917 origins as the YWCA. 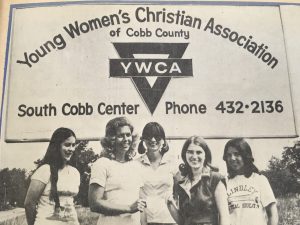 In 1917, the year the United States entered World War I, a small group of women joined resources to begin YWCA of Northwest Georgia. The women sent packages to soldiers overseas during the war, while keeping their focus on making a difference in the community. Over the years, the dedicated woman of the YWCA (Young Women’s Christian Association) built a rich history serving our area. The organization is now called liveSAFE Resources. For more than 100 years, the women have been using their collective voice to speak out for equality and justice for those with no voice.

The name change was prompted by a laser-focused vision on a community free of domestic violence and sexual assault. The board’s decision to close the YWCA pool, a part of the community since 1962, was difficult but necessary to change the community’s perception of the Y as a gym, day care and community pool.

In 1978, with the help of their husbands, fathers, sons, and community partners, the women of liveSAFE built Georgia’s first shelter for battered women. Since, the staff and volunteers have expanded services to assist thousands of men, women, and children by providing sexual assault and abuse counseling, emergency shelter, legal advocacy, temporary housing, job training, child care and more.

A $7.2 million capital campaign helped make critical improvements to the building at 48 Henderson St., Marietta, and the emergency shelter (at an undisclosed location) which underwent major renovations completed in 2015.

• Domestic Violence Housing. Moving clients toward independence and self-sufficiency. There are 12 apartments onsite and three houses located within minutes of the administration offices.

• Elder Abuse Program. Anyone over age 50 who has experienced abuse by a partner, spouse, adult child, grandchild or caretaker has access to advocates who provide case management.

• Counseling. Free professional counseling services to victims and survivors of domestic violence and sexual assault and their family members, regardless of whether the event(s) took place recently or in the past (also available in Spanish).

“LiveSAFE Resources empowered me to make the move, and move out of my abusive situation,” said one survivor. Another said, “They are here in our community. They provide a service that is so needed and their staff genuinely cares.”

“Violence has escalated because of the COVID-19 pandemic,” said Tracey Atwater, executive director. “Loss of jobs, funds and schooling at home has made it even harder for victims and children to escape, but the shelter is still completely operational with social distancing guidelines in place.”

Atwater beams when she speaks about all the programs liveSAFE offers. “Our vision at liveSAFE is for our communities to be free from domestic violence, sexual assault, and elder abuse,” she said.

For more information about liveSAFE programs or to support these important services visit: livesaferesources.org (which has a safe exit button on every page) or call 770-427-2902. For those who need help, call the 24 Hour Hotline: 770-427-3390.