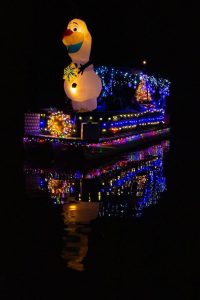 Not only do boaters enjoy decorating and riding in the parade, but the shoreline viewers enjoy it immensely. The first Saturday in December is the date set annually for the parade – an easy way for the participants and the viewers of the parade to remember from year to year.

While 2020 has been an unusual year, to say the least, the LAA (a nonprofit organization) wants this year’s event to be the best yet. With social distancing being an important issue these days, boat operators can choose who they want to ride with them on their boats. Boats will be traveling so far apart that social distancing should not be a problem.

The fourth annual Lights on the Lake Christmas boat parade will begin at 6 p.m. Dec. 5. Each year, the LAA donates the parade proceeds to a children’s nonprofit organization from one of the three counties (Bartow, Cherokee and Cobb) in which the lake is situated. The 2019 recipient was the Flowering Branch Children’s Shelter in Bartow County. This year, the Children’s Haven in Canton will receive the proceeds; the goal is to raise $10,000.

There will be a prize awarded to the most festively decorated boat in four categories: houseboats, cabin cruisers, pontoons and other.

The registration fee is $50 for each boat. Donors of $50 receive a T-shirt. Shirts can be purchased for $20. Sponsorship is another way to support the effort. Details are available at http://Christmas-Reg-fikket.com.

The parade can be seen from one of the following viewing areas: Bartow County/Gatewood Park on Bartow Beach Road in Cartersville, and Cooper Branch No. 1 Boat Ramp at Ga. Highway Spur 20, Cartersville.

The mission of LAA is to bring together lake users, local businesses and government toward improvements in lake water quality, levels and safety for its recreational users. Our goal is to be the voice of Lake Allatoona. www.lakeallatoonaassoc.com.

– Linda Hartsfield, an LAA board member, has been retired three years from the U.S. Army Corps of Engineers after more than 41 years of service.