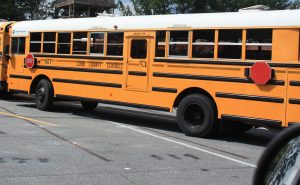 The Cobb County Police Department is concerned by a 31 percent increase in the number of cars illegally passing school buses as children enter and exit.

Cobb County Police Sgt. Dana Pierce discussed the numbers in September prior to Around Acworth’s deadline. August was the most recent period for which numbers were available.

Pierce said the drop in 2015 could be due to a marketing campaign that took place at the time to increase awareness about Georgia school bus laws. Officials are trying to determine why the number escalated in 2016, he said.

Cobb County has a contract with Texas-based American Traffic Solutions (ATS) to monitor and cite violators of the school bus stop arm law. If a car passes a Cobb County School District bus when the red stop arm is extended, a camera snaps a photo and transmits it to ATS. The company sends the information to Cobb officers and if they determine there was a violation of Georgia law, the county sends the information back to ATS, which sends the registered owner of the car a citation.

In Georgia, illegally passing a school bus is a misdemeanor traffic offense that is punishable by 12 months in jail or on probation, $1,000 in fines, community service and defensive driving school. The minimum fine is $300 for the first offense, $750 for the second, and $1,000 for a third offense. For a driver under age 21, there is an automatic six-month license suspension.

Cobb officers aren’t sure if the spike in 2016 is due to more cameras on buses, or distracted drivers, or something else. Officers are meeting to find answers. Meanwhile, raising awareness of the law and catching violators are extremely important, Pierce said.

“If we could save one life by citing someone who has clearly violated the school bus arm law, then we as a county are better for that for the safety of our children,” Pierce said.