Caregivers Get a Boost With Support, Education

During the nine years I was a caregiver for my mother, who had Alzheimer’s, I sought information from friends, the staff of the assisted living facility where she resided, and a book, “The 36-Hour Day.” I needed to know how to better love Mom through Alzheimer’s.

I attended a workshop for the family of residents, where Sheila Welch, the leader of a local dementia support ministry, offered helpful tips on communicating with people who have dementia. She demonstrated how to properly assist them walking and gave examples of how dementia distorts vision and hearing. I wished I’d known these simple techniques earlier in my Alzheimer’s journey. She shared her experiences to encourage and empower other caregivers. I chatted briefly with Sheila after the workshop, because I was interested in the support group, Loving Through Dementia.

Sheila began her advocacy training while in college after her father’s first heart attack. As his health declined, Sheila and her husband, Kim, along with her brother, spent more than 10 years as secondary caregivers for both of her parents. She learned to advocate respectfully on behalf of her parents when communicating with medical providers, assisted living staff, pharmacists and Medicare/Medicaid. Attending doctors appointments and hospital stays, preparing and delivering meals, overseeing medications and other responsibilities were complicated further by traveling from Marietta to her parents’ home in South Carolina. Cognitively sound and in spite of his poor physical health, her father cared for her mother after her Alzheimer’s diagnosis in 1997, until his death in 2004 when Sheila became her primary caregiver. She soon realized the tremendous stress her father had endured.

A chance encounter in a hospital gift shop opened Sheila’s heart and eyes to the burden that caregivers carry. A stranger who was steps ahead in her caregiving journey, advised Sheila to protect herself. She realized she was not alone and how dementia caregivers are at risk of being consumed emotionally, financially, spiritually and physically. After years of caring for her parents, she learned how knowledge empowers us to better care for our loved ones, but commands us to care for ourselves.

After her mother’s death, Sheila shared her experiences in caregiving with a support group at Due West United Methodist Church in Marietta. A year later, she and Kim assumed leadership roles of the group, which would grow into an important ministry. As Sheila heard caregivers share their heart-breaking stories, she felt a call to action. She began an earnest pursuit for dementia education.

During the years, Sheila attended numerous conferences and workshops featuring Teepa Snow, a world renowned expert in dementia education. Loving Through Dementia has hosted Positive Approach to Care workshops the past five years as well as three Snow conferences.
Loving Through Dementia also has hosted three workshops for multi-faith and community leaders and eight annual legal seminars. Additionally, Sheila and Kim host four monthly support groups in their home. Two family groups and one spouse group were started based on specific needs of caregivers of persons living with dementia. Recently, a grief group began for caregiving spouses whose loved ones have passed away. Due to COVID-19, these support groups are meeting virtually.

Why is support for caregivers of loved ones with dementia so important? According to ALZ.org, more than 5 million Americans are living with Alzheimer’s, the most common form of dementia. Unpaid care valued at nearly $244 billion is provided by 16 million Americans, 30% of whom are 65 or older. Four out of five families fracture from the stress. Many assume responsibility for every aspect of their loved one’s life.

Sheila’s motivation to educate and empower others is summed up in a quote by pastoral theologian John Swinton. “The problem is not that people with dementia forget. The problem is that they are forgotten.” Loving her mother through dementia taught her to hold tightly to the Serenity Prayer. Sheila and Kim continue the mission, facilitating through Due West UMC to educate the community, the church, loved ones and even physicians of the devastating effects Alzheimer’s and related dementias have on persons living with dementia and their loved ones.
As family and friends stand by watching their loved one gradually disappear, even though often physically healthy, some wonder where is God? Sheila’s answer is that God is where he has always been, holding his children. She believes the question has become “Where are we, the church and the community, in all of this?” Her prayer is that help, hope and inspiration will come with proper education specific to Alzheimer’s and related dementias.

For more information and support, contact Sheila at dementiaministry@duewest.org or visit www.lovingthroughdementia.org. 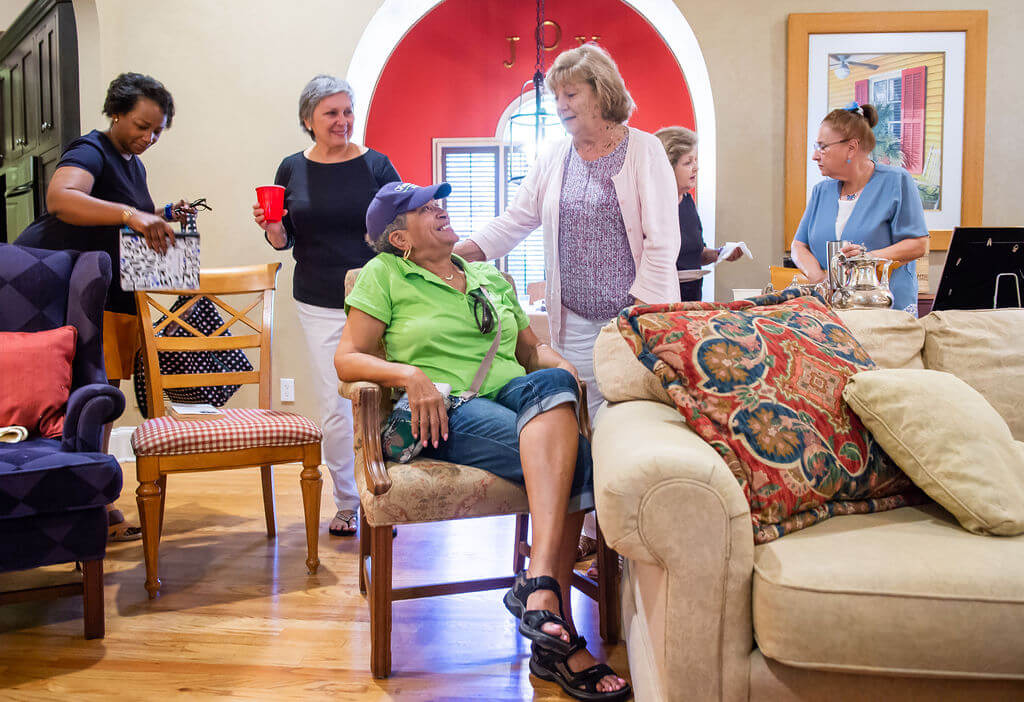