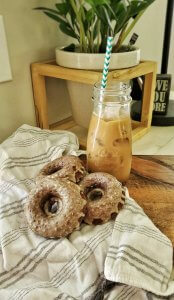 Homemade Pastries for Your Sweet Tooth

National Doughnut Day is celebrated annually on the first Friday of June. Did you grab a free doughnut from the number of retailers who offered them? Were you as disappointed as I was with the selection?

Doughnuts didn’t start out as the sad, preservative-filled junk food we now recognize. In World War l, the Salvation Army sent members to Europe to feed and lift up tired, lonely soldiers with (you guessed it) doughnuts! They found it so effective for boosting morale that, in World War ll, the Salvation Army again made its way dangerously close to front lines to fight the war against hunger with doughnuts. It is those brave bakers and Salvation Army members that we celebrate by observing National Doughnut Day, so I pledged to honor them with something fresh and scratch-made from my home kitchen.

The easiest way to make doughnuts at home is to use a doughnut-cavity baking pan, available at various retailers. This pan allows you to make a basic cake batter turn out looking like doughnuts! My glazed chocolate doughnut recipe is simple, and will yield a wonderfully moist treat.

My family has been celebrating Doughnut Friday at home since the pandemic began, thus offering baking lessons for my kids and something fun to anticipate! They absolutely love the cake-style doughnuts referenced above, but their favorite is a filled doughnut. It’s a touch more time-intensive, as a yeast-raised dough requires a double rise. However, filled doughnuts have a wonderful, soft texture that won’t deflate, and a not too sweet cream filling that your taste buds will thank you for.

Don’t forget your neighbors and friends when you bake! It’s the best way to portion-control your own household and spread joy through the community at a time when we need it most. Happy baking! 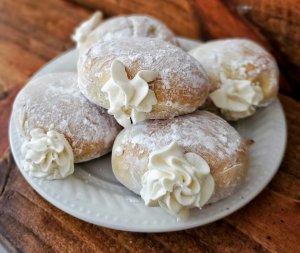 In a large mixing bowl (preferably a stand mixer), whisk together sugar, packet of yeast, salt and half the flour. Add milk, yolks, vanilla and 3 tablespoons of butter; mix to just combine. Cover with plastic wrap and leave for 10 minutes at room temperature until bubbles form on the surface. Add remaining flour and mix with a dough hook on medium speed for about 4 minutes until the dough is no longer sticking to the bowl. If the dough continues to be sticky, add ⅛ cup flour at a time until the texture is correct. Cover the bowl again and leave to rise in a warm place for about an hour, until doubled in size.

Dump the dough onto a clean floured surface and roll into a half-inch thick circle. Cut circles using a biscuit/cookie cutter or a glass, getting as many doughnuts out of the first roll as possible. Reroll scraps to complete. Allow the doughnuts to rise again under a tea towel on a parchment-covered baking sheet at room temperature for 30 minutes, until puffed up.

Preheat the oven to 375 degrees. Remove the towel and bake the doughnuts for about 11 minutes; do not allow them to get brown. Quickly dip the warm doughnuts into powdered sugar to coat.

Make buttercream; add 1 stick of butter and 1 ½ cups confectioners’ sugar to a mixing bowl; beat until combined. Add 1 tablespoon vanilla, ¼ teaspoon salt and beat until light and fluffy (about 3 minutes). Scrape down the bowl and add 2 tablespoons of sour cream and mix until just combined. Fill a piping/zip top bag with buttercream.

Using a small sharp knife, cut a slit into the side of the cooled shells and fill with buttercream; fill until the sides slightly puff out. 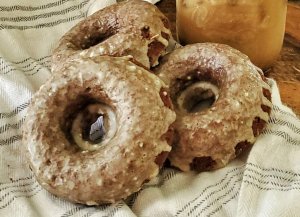 Preheat the oven to 375 degrees. Spray your doughnut pan with nonstick spray. Sift or whisk your dry ingredients together in a large bowl — flour, sugar, cocoa, salt, baking powder and soda. In a separate bowl, whisk together coffee, buttermilk, butter, oil, vanilla and egg. Slowly stir wet ingredients into dry ingredients until just combined. Let sit for a minute and stir just a bit more, making sure to scrape the bowl and ensure no dry lumps remain. Do not overmix.

Transfer batter to piping/zip top bag (cut the corner off when ready to use). Fill each doughnut cavity ¾ of the way up to allow for rising while baking. Bake for 11 minutes, or until a toothpick inserted into doughnut comes out clean. Cool doughnuts in the pan for 5 minutes, then remove and place on a baking rack to cool.

Optional glaze: Mix 1 cup confectioners’ sugar, 1 tablespoon of milk and splash of vanilla until smooth. Dip cooled doughnuts halfway into glaze and top as desired with nuts, sprinkles, fruit or enjoy as is!