Honey is one of the oldest foods in the world. It has been found in tombs in ancient Egypt, and for centuries, doctors on battlefields carried it to assist with healing. Even today, local honey is touted for its many health benefits. Honey is medicinal and it tastes good, too. There are many culinary uses. 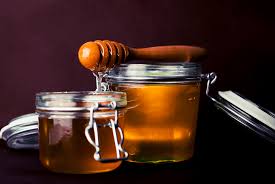 One teaspoon has approximately 64 calories with no fat or cholesterol. It has about the same sweetness as granulated sugar. Because honey never goes bad, it is a handy ingredient to keep stocked in your pantry.

Want to amp up cooked veggies? Drizzle with a little honey. Need a healthy salad dressing?  Combine honey, extra virgin olive oil and a little lemon or lime juice. Try making honey roasted vegetables by peeling and chopping four sweet potatoes, five carrots and four to five parsnips. Add four shallots halved, and mix in a large bowl. Cover with just enough oil to moisten the veggies, then drizzle with approximately half a cup of honey. Sprinkle generously with cinnamon and nutmeg, then spread on a foil-lined baking sheet. Salt to taste and bake at 400° for approximately one hour (until the veggies caramelize), stirring every 20 minutes.

Honey is great with poultry and pork. Season a pork loin with salt and pepper and place in a slow cooker. In a small saucepan, heat approximately one cup apple cider (or apple juice with one tablespoon apple cider vinegar) and approximately one-quarter cup honey. Heat until the honey is dissolved, then pour over the pork. The cider will tenderize the meat and the honey will coat it. You can also add some nutmeg, which pairs nicely with the meat. Chicken is another tasty dish with honey. Bake several chicken breasts at 350° for approximately 30 minutes. While they’re cooking, combine one-half cup of honey with two tablespoons (or more) of Dijon mustard and a splash of apple cider vinegar. Pour over the chicken and bake an additional 15 minutes, or until the chicken is done. If you have leftover chicken, make honey cranberry chicken salad by shredding the chicken and combining with mayo, salt and pepper, chopped, dried cranberries, chopped nuts, and just enough honey to reach the desired sweetness.

To make an easy dessert, toast store-bought pound cake slices, then top with fresh berries. Drizzle with honey and lime juice, then top with whipped cream. Be adventurous when trying different uses for honey and who knows, your own Honey might just be impressed. Happy cooking, everyone!

By contributing writer Tiffany Hughes, an Acworth resident who is an educator at Tellus Science Museum. She enjoys spending time with her family and furbabies. Contact her at creativecook11@yahoo.com.