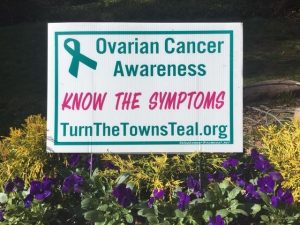 Acworth resident Beverly Coffman Keller is asking Acworth businesses and residents to “Turn the Town Teal” in September as part National Ovarian Cancer Awareness Month. Keller, who was a nurse for 40 years, is providing, in exchange for donations, teal ribbons, posters and yard signs that she hopes people will place outside their businesses and homes to draw attention to the cause. The money will go toward research at the Ovarian Cancer Institute, based at Northside Hospital, to help find a method for early detection, Keller said.

The disease is often discovered in the late stages. Keller’s daughter, Nicole Derrick, died of ovarian cancer Nov. 7, 2011, following a late diagnosis.
“Right after her second child was born, she had a little lump on her cesarean incision,” Keller said. “A biopsy came back that said it was ovarian cancer, and it was already Stage 4. She made it a little more than three years.”

The mother and daughter had been more like best friends, Keller said. “We lived a few doors away from each other, and there wasn’t a day that went by when she did not give me a hug. She was a vibrant mother and wife. She always had joy in her heart. She was singing a hymn, ‘Oh, How I Love Jesus,’ an hour or two before she died.”

Keller said a need to reach out to help others after her daughter’s death led her to become a volunteer ovarian cancer awareness ambassador.
“Research for an early detection method is so important,” Keller said. “Any amount of donation is appreciated.”

For information about symptoms, go to turnthetownsteal.org and click on the symptoms tab.

To donate directly to the organization, the address is: Ovarian Cancer Institute, 980 Johnson Ferry Road, Suite 130, Atlanta , GA  30342. The organization’s website is ovariancancerinstitute.org.