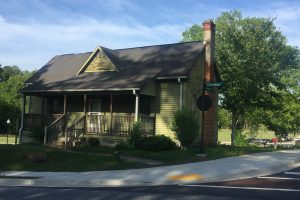 Construction is underway at Art at the Park House, a nonprofit arts center in Logan Farm Park that will offer art education and works by local artists. Completion is expected in November.

The focus of the nonprofit, which was initiated by Mayor Tommy Allegood, will be education. The center will offer a mix of painting classes and sponsor events and activities.

“The city saw an opportunity to expand its cultural arts,” Allegood said. “This was just an ideal location.”

Cathy Green will serve as executive director of Art at the Park House. Green managed the former Gallery 4463 in Acworth from 2013 until 2015. The Ohio native and watercolorist has lived in Acworth since 1991. She attended Ohio State University and is a graduate of the Columbus College of Art and Design.

The gallery will include two- and three-dimensional artwork “in a wide variety of media,” Green said.
Membership will be open to new and emerging artists.
Tentative plans include six art shows each year and art classes will be offered for all ages. Memberships will include options for both artists and patrons.

“I would love for this to be a gathering place where everybody knows everybody,” Green said.
With that in mind, she also plans to offer the space to rent for small private events. Wi-Fi will be available and talks continue about other community opportunities for the space.

Offering “high-quality crafts” at the Park House is being considered, Allegood said.

Another refreshing opportunity may be some type of mobile ice cream vendor.

“I think we’re going to have some real fun with ice cream,” said Allegood, adding a smile.

The house is a piece of Acworth history. One of the first African-American-owned businesses in Acworth set up shop there, offering shoe and boot repair in the 1940s, according to Alderman and Acworth native Tim Houston. “That’s one of the reasons it was important to preserve it.”

The shoe shop was in the lower level and the owner lived in the floor above, said Houston, who has been an alderman in Acworth for 13 years. The house burned to the ground in the 1980s, but was rebuilt just as it had been soon after, Houston said.